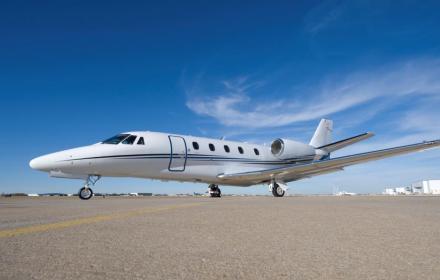 Citation XLS, a business jet put into operation in 2006, is the evolution of the most successful business class aircraft and the most sellable vehicle in the mid-range aircraft category. Its cabin was completely refitted and has become even more similar to such executive aircrafts as Sovereign and Citation X. The main external specificity is the aircraft nose section. The vehicle has two turbofan engines Pratt & Whitney PW545C installed with the FADEC system which controls the engines and allows reducing the impact load on the crew in flight. The aircraft is also equipped with Rockwell Collins Pro Line 21 avionics suite with 4 full-color LCD displays, instead of the previous Honeywell Primus 1000 suite. The aircraft is ideal for mid-distance flights across Central and Eastern Europe, Russia and the CIS.